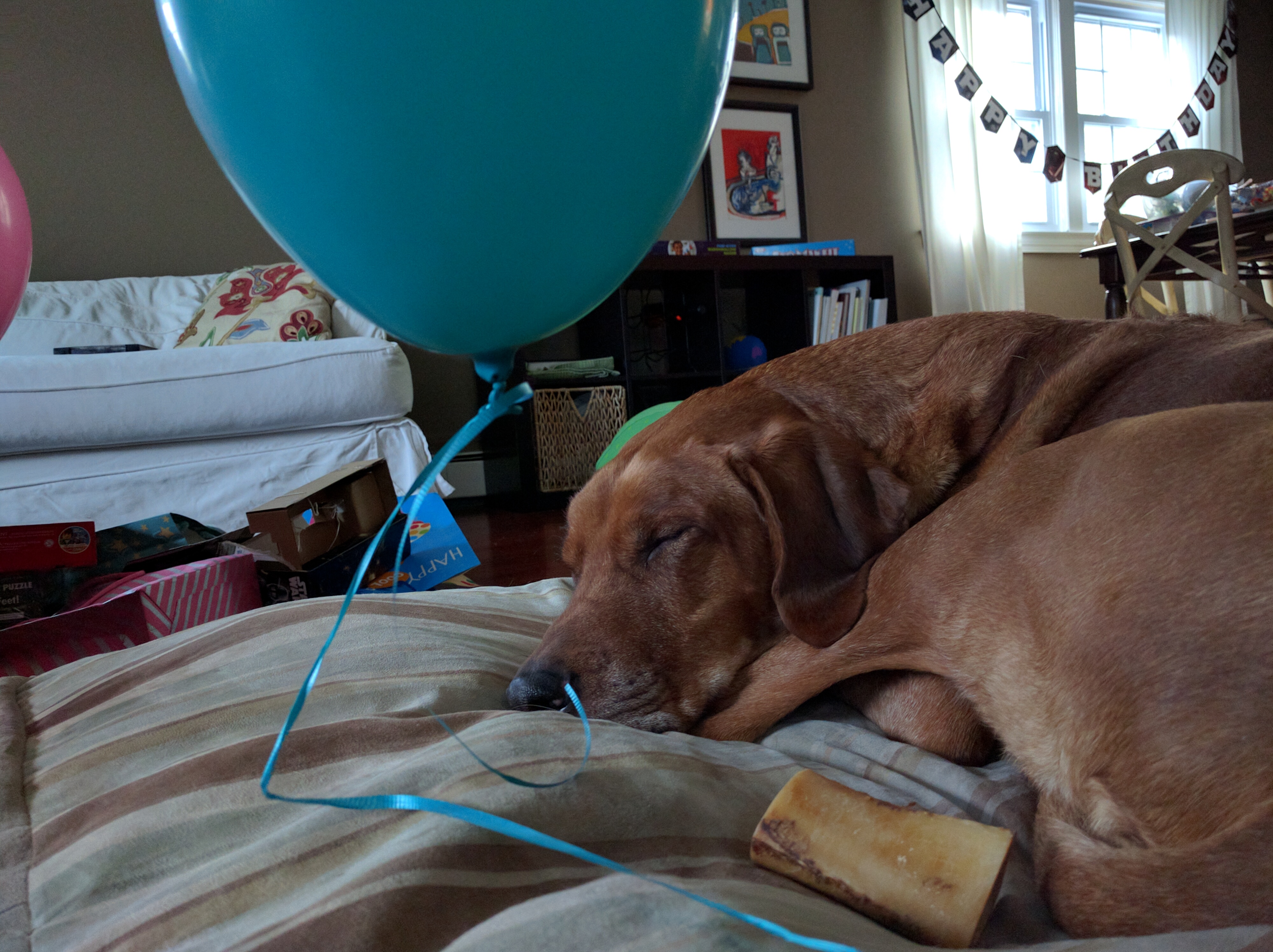 Sorry to email at what must be a particularly busy time of year for you and the tiny northern Foxconn elves, but I feel the need to bring certain developments to your attention in order to clear up some understandable misconceptions surrounding any reports of my “bad” behavior this year.

* For the record, Hogan is undeniably naughty and probably deserves nothing, but please do not penalize me by erroneous association with the counter surfing Rhodesian Ridgeback.

Hogan has never thought much of the idea of him being a canine. He uses pillows like a human, he stretches like a cat, and should he find himself at a dog park, he goes over and stands by the chain link fence with the other owners. He’d smoke if he could… probably menthols.

One of the employees at Paws Here, the doggy daycare that Hogan occasionally visits when his schedule does not mesh with ours, took me aside one day and suggested that Hogan not come on Thursdays, because Thursdays tend to be a busy time for them. She thought he’d enjoy Fridays better, since Fridays apparently offer a lower population of dogs. “He just doesn’t seem to enjoy playing with dogs. He hangs out with us instead of the animals. He sits in our chairs. He eats our bagels. He’s just odd.”

But this week Hogan slipped into complete denial. He agreed to walk around the reservoir on the end of a leash as long as it was agreed that I would feed him immediately upon our return. On our trip, however, he completely refused to chase… or acknowledge for that matter… an incredibly slow, dim-witted deer that waddled across the path in front of us and proceeded to stand staring at us. Hogan stared at the deer, did the math, and then proceeded to walk toward home. “You got a picture? Great, man. Let’s go. It’s a little cold.”

Do not be confused by the blurry photograph. Crappy phone camera, crappy photographer… but perfectly motionless deer that is about 25 yards away at most. Notice the distinct lack of an excited Ridgeback in the picture.

Mom reads me books over and over and over again. I like hearing the same book read to me, because I often fall asleep and miss parts. Depending upon how full my belly is, it can take me several nights to get through a whole story.

Near the end of the book, the katurpiller faces the consequences of extreme and embarrassing gluttony after he gorges himself on all kinds of trash, discarded candy, and other detritus until he gets a debilitating stomach ache. Finally, having learned nothing from his shameful behavior, the katurpiller binges one final time and crams so much into his gullet that he can no longer leave his house and he dies a lonely shut-in.

That’s a very sad ending but it’s probably a relief to his katurpiller boss, since his disability payments were no doubt killing his leaf harvesting company and his boss can now outsource the very hungry katurpiller’s job to an Asian butterfly who has excellent math skills, has an incredible work ethic, and who only needs to eat a tiny bit of flower sap once a day.

Another book we read quite often, The Giving Tree, is complex and rather troubling. The author looks scary and he writes about a tree that talks to a boy. Mrs. Tree gives everything, but Mrs. Tree gets nothing back. That’s basically the whole book, but Mrs. Tree’s raw deal is even worse when you look closely at the situation, and we’re going to look more closely at Mrs. Tree’s plight in part two.

This is what’s known as a “teaser,” so I’m not going to talk about Mrs. Tree until my second book review.

Before we go, you should know that this Shel guy not only gives me a lot to think about, but he also gives Hogan Dog nightmares. As you may know, Hogan’s canine ancestors actually worked for a living. Ancient ridgebacks chased down lions that needed chasing, so Hogan was shocked when he learned of Shel’s book about a lion who shoots back. It’s called Lafcadio: The Lion Who Shot Back.

Lions that shoot back at ridgebacks? That’s crazy talk! That’s unacceptable! Now I know why Mom hates cats so much; cats are freaking dangerous and unpredictable any way, and now we come to learn that some of them are armed! Unbelievable!

I want Mom to get the book and to read it to me several times, so I can figure out where this ridgeback shooting lion is. If Lafcadio is somewhere far away, like South Africa or Arlington, Hogan will be able to relax more… although too much more Hogan relaxation might mean that the vetteranarrian can’t find Hogan’s pulse any more, so we might tell Hogan that the shooting back lion is kind of close, but not too close, so Hogan will wake up once in a while to make sure there’s no shooting back lion in the yard. Hogan hasn’t been this upset since he learned about the spraying back skunk!

That’s all for this book review. We’ll analyze what went wrong with Mrs. Tree next time, so if you haven’t had The Giving Tree read to you yet, now’s your chance to get caught up. It’s a complicated book, so make sure someone reads it to you several nights in a row.

Until very recently we’ve only had one model for all of our photo shoots, and his name is Hogan. Now that Abigail has arrived, Hogan has been grudgingly gracious when it comes to sharing camera time, but we were bound to have an incident eventually.

On Saturday, we took Hogan down to the little league field for a series of nude photos that we planned to submit to RRCUS for next year’s “Wild Ridges Rising!” Ridgeback calendar. He wasn’t thrilled about wearing only a thin nylon collar in the frigid temperatures and blowing snow of glacial Massachusetts, but after a bit of coaxing and leash tugging, he regained his professionalism and posed for the picture seen here.

He was quite pleased with the shot and figured the calendar shoot was a wrap, but since we were already on location we decided to take a few more shots.

Things turned suddenly ugly when Emily and Abigail casually strolled into a shot where Hogan was demonstrating his “action sit” between second and third base. You can see here that he is less than amused that Emily and Abigail have barged into a photo he felt had a legit chance to become the backdrop of either February or March of the RRCUS calendar.

Whether it was the early stages of frostbite on his tail or the final straw of once again sharing the stage with rival talent, Hogan lost his mind at this point, barked some unrepeatable comments at the cameraman, and then did what one should really refrain from doing to the person who feeds, houses, and walks you. It was not a proud moment for anyone involved.

We will not be submitting the resulting violent picture to RRCUS, although Hogan did argue later that it shows off his better side. We’re also now in the market for a good used camera!

I cornered, captured, and consumed my first delicious diaper today. Emily, foolish wench, was so jealous that she hysterically screamed obscenities and rudely attempted to snatch away my fairly found diaper. Her regrettable actions forced me to eat it too fast and I have made a mental note to bite her later.

Although my contraband diaper was quite delicious, I now find myself unable to move from my leather lounger for any length of time without feeling sharp pains in my stomach; I think they may be hunger pangs… hunger pangs for more diapers. No matter… I will sleep this diaper off, dream of dirty diapers not yet made, and seek out new dirty diapers tomorrow.

And I will bite foolish Emily when I feel better, as I think I may have mentioned, for trying to take my dirty diaper away. Or… or… maybe I will just lick her. I am undecided. I will sleep and ponder this quandary.

That is all for now.