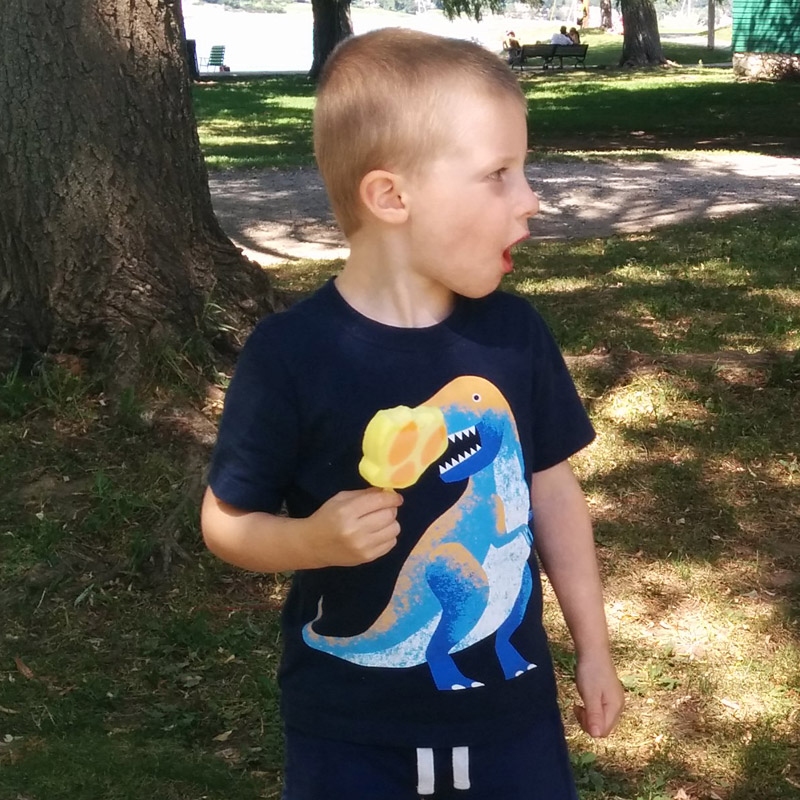 When Jackson visited the vintage arcade and skeeball courts of semi-seedy Salem Willows in late summer 2015, he fully expected his hard-whined-for ice cream to require focused defense against parent bites, ants, wharf rats, semi-domesticated sea gulls, and even his sister’s offers to help him finish. Unfortunately, he never suspected his trusted dinosaur shirt as a top dessert predator.

Normally the Tyrannosaurus Rex on a midnight blue background is an excellent all around clothing choice; it competes favorably even with the legendary three wolf t-shirt. Comfortable, intimidating, eminently stylish, the T-Rex shirt and Jackson are constant companions, but in our fallen world all friendships have their limits.

Update #1: it happened again! TRex helped himself to Jackson’s pancakes at The Ugly Mug:

Much is happening in this series of nature photographs taken with the Nikon 3700 Ultra Z camera, a device more commonly used to capture the movement of hummingbird wings. Please note the Jackson’s unique style of consuming a cone from not one, not two, but apparently from three different sides. There’s little question now that this species’ wrist is double-jointed. Notice also how quickly the Abber shakes off a vicious ice cream headache (last defense of the iced dessert) and continues to shovel Jimmie-crusted Oreo ice cream to its death.