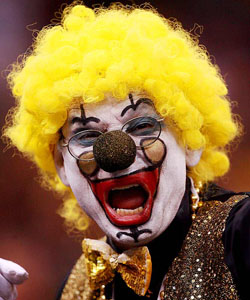 Unfortunately for me, the New Orleans Saints have postponed their late season swoon this year. As they’re practically assured of a first-round bye at this point, we’ll have to wait until the second round of the NFL playoffs to watch them crush the tiny hopes and dreams of a below-sea-level, eyesore city not yet recovered from the whims of category four hurricanes and category considerably less emergency response teams.

Author’s note: the Jets and the Mets and the Orangemen and all New Yorkers still respectively suck and Rex Ryan (the Santa job at the mall is open when you get fired, Rex!) is now an obnoxious crybaby, instead of simply being an obnoxious bore. None of this is pertinent to the Saints, of course, but these facts should not be misplaced even during the brief Kenny euphoria brought on by an overachieving Drew Brees who couldn’t quite throw enough interceptions to derail the clownish, bayou pretenders.

I’m thrilled there’s at long last a mosquito’s appendix-sized bit of joy in the Silbergleit athletic spectator ranks, even if Kenny needed to travel to Louisiana to support a questionable American quasi state foolishly named after a European Monarch… a buggy, boggy burg where biting someone with your own teeth is considered simple assault while biting someone with your false teeth is prosecuted as aggravated assault. Who knew?

I’m not calling Kenny unAmerican; but if anyone else wants to do so, I think they’re certainly entitled and on firm footing to make such an aggressive claim. In any case, he’s certainly no fan of Patriots and his fries are apparently French, not Freedom.

I’ll never understand how these backward, fall-behind at the start of every frickin game but then come back people ponied up to win 10 NFL games in a row, but fair is fair, so here’s a life-size picture of Kenny’s legitimately earned prize… an elixir he can quaff quietly as the Pats exact swift revenge on the Saints Monday night.