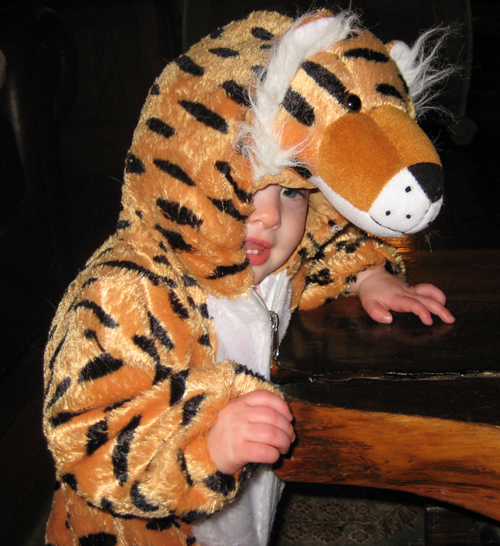 In a move surely designed to antagonize Hogan, Abby “chose” to be a tiger for Halloween. More troubling, Abby then “decided” to try on her furry outfit and to parade in front of the Rhodesian Ridgeback as he dozed on his leather lounger.

Hogan did not, however, leap off the couch and try to corner the “cat” in the livingroom. Instead, he merely lifted one weary eye toward costumed Abigail before circling three times on the cushions and returning to the realm of canine dreams.

When later asked about his lethargic reaction to a wild tiger clearly in need of chasing, Hogan seemed surprised that the tiger was in fact Abigail in disguise. He explained his lack of interest instead by insisting that his ancestors were “lion hounds,” not “tiger hounds.” He patiently explained that there are lions, there are tigers, and there are bears in the world, and that each respective game species has an appropriate breed of hound to chase them.

He was not at all sure what breed of dog should chase tigers, but in any event, he made it clear that it was not the Peabody Ridgeback.